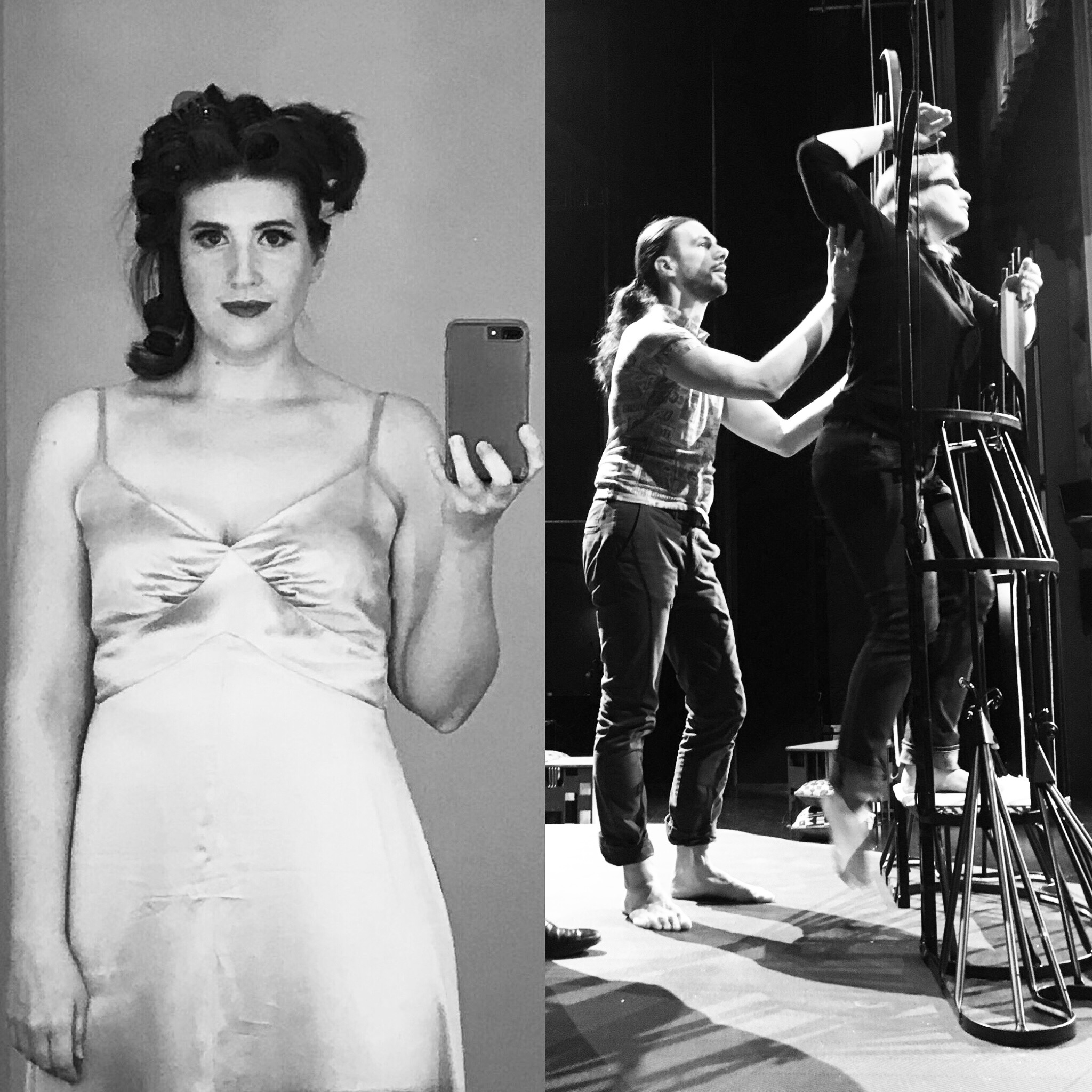 “You have a good mind, a pretty face, a disciplined body that does what you tell it to. You have everything it takes to be a lovely woman except the one essential: an understanding heart. And without that you might just as well be made of bronze.” –The Philadelphia Story

Previously, in Katharine’s Epically Long Musings on Identity And Her First Entführung: some thoughts about the character of Konstanze and how she relates to (and is changing) my own identity. Today, I want to write about bodies.

The body can be a vehicle for music, for illness, for slight inebriation on delicious French wine, for pulses of the blood and hormones, for fatigue. The body can be a magnet for desire, for criticism, for violence, for love. As a singer, my body is my instrument: I can’t escape this identification of my body with my work, my self, my value, my effectiveness. Being a singer (or any kind of performer) has a lot in common with being an athlete–no matter what your gifts, you’re only as strong and stable as your body is, and this is complicated. This part of my identity has been both affirmed and challenged mightily in the last few weeks. END_OF_DOCUMENT_TOKEN_TO_BE_REPLACED 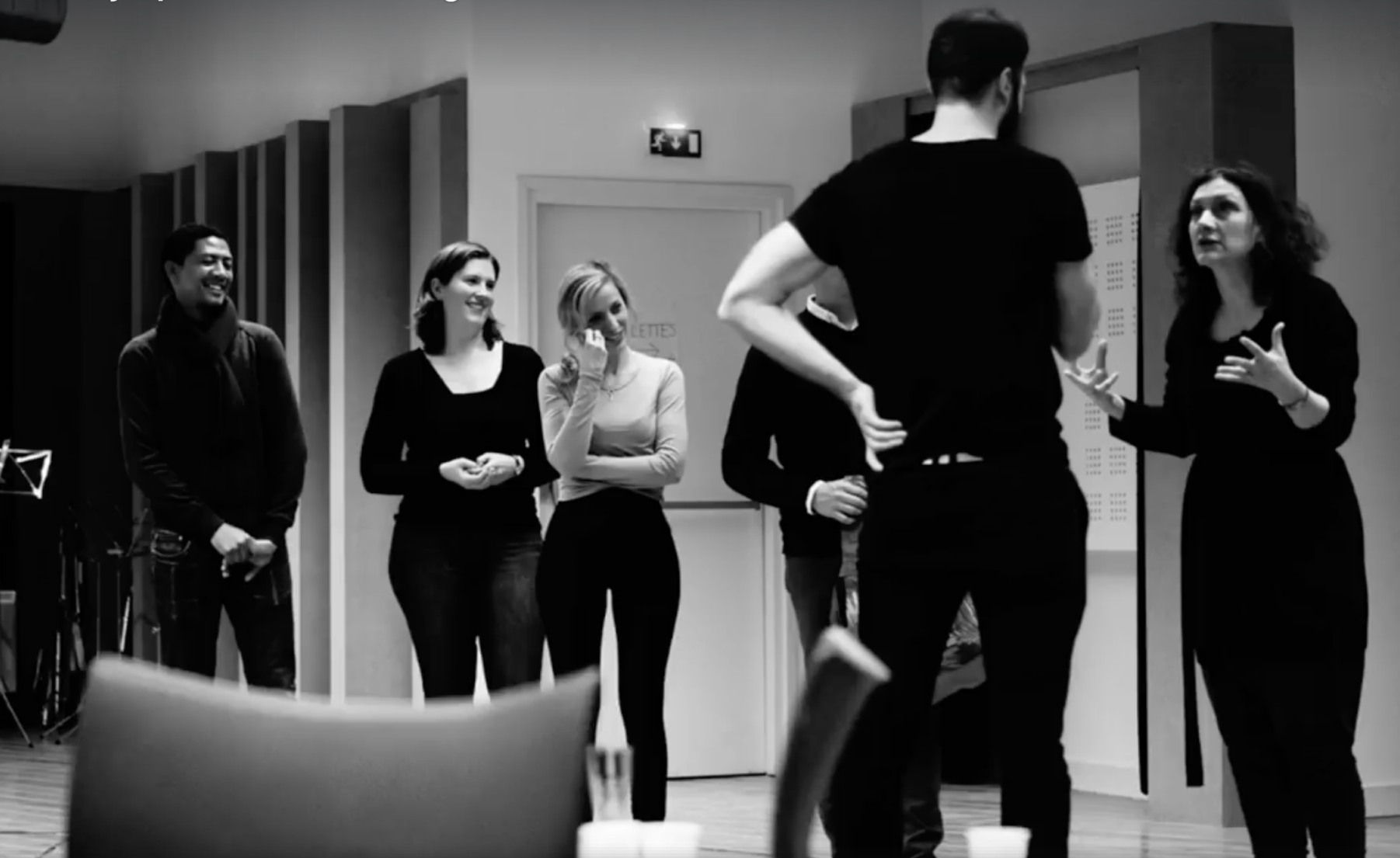 Since I arrived in Clermont-Ferrand to begin rehearsals on my first Konstanze (in Mozart’s Die Entführung aus dem Serail) in the second week of December, so much—in myself, in my singing, in my thinking—has shifted, or begun to shift. I couldn’t have asked for a more focused, attenuated, ambitious work process to bridge this change in the year and point the way forward. A lot of this focus has come from working on such a rich and challenging role, of course. Konstanze is changing me as much as I’m trying to shape her in rehearsal, and I feel so lucky to be here doing this piece in particular, and with this team. But this hasn’t been the only thing working on me. END_OF_DOCUMENT_TOKEN_TO_BE_REPLACED 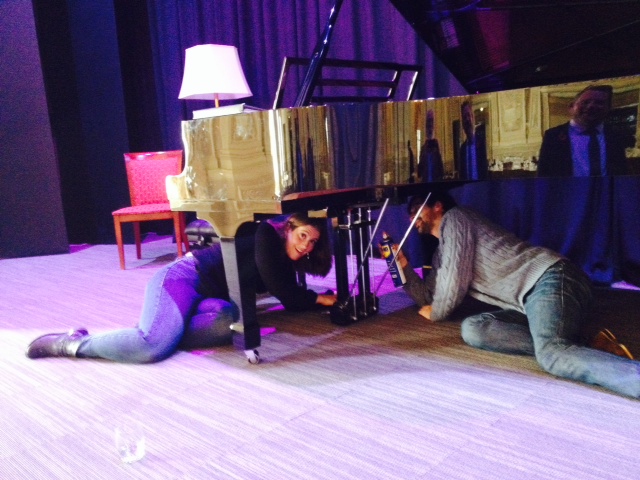 Gentle reader, if you’re laboring under the misconception that my job is glamorous and high-brow, let me set the record straight.

That picture up above? It’s me (already in concert makeup) and an internationally renowned pianist crawling around under a resoundingly mediocre rented grand piano an hour before our recital together, trying to identify the source of an annoying pedal-related squeak and WD-40 it out of existence. We only kind of managed, but in the meantime, the presenter, laughing uproariously, snapped this picture and declared he was going to use it in next year’s season brochure.

END_OF_DOCUMENT_TOKEN_TO_BE_REPLACED 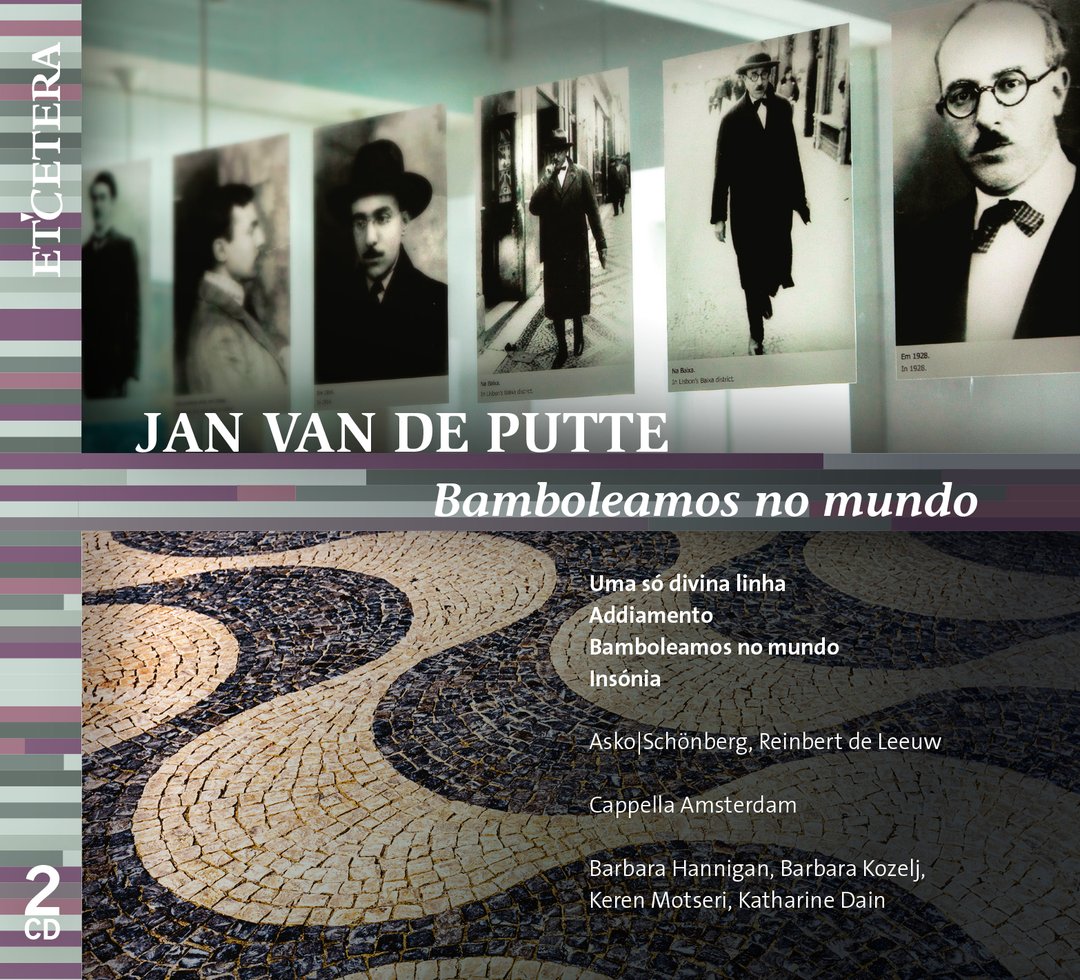 On December 3rd, my first commercial recording as a soloist will be released on the Etcetera label: a live recording of the world premiere in Amsterdam’s Concertgebouw of Insonia, one huge movement from Dutch composer Jan van de Putte’s monumental Pessoa-Cyclus. The CD, which also features sopranos Barbara Hannigan and Keren Motseri, mezzo-soprano Barbara Kozelj, Cappella Amsterdam, and Asko|Schönberg under the direction of Reinbert de Leeuw, will be available for purchase here in a few weeks. END_OF_DOCUMENT_TOKEN_TO_BE_REPLACED 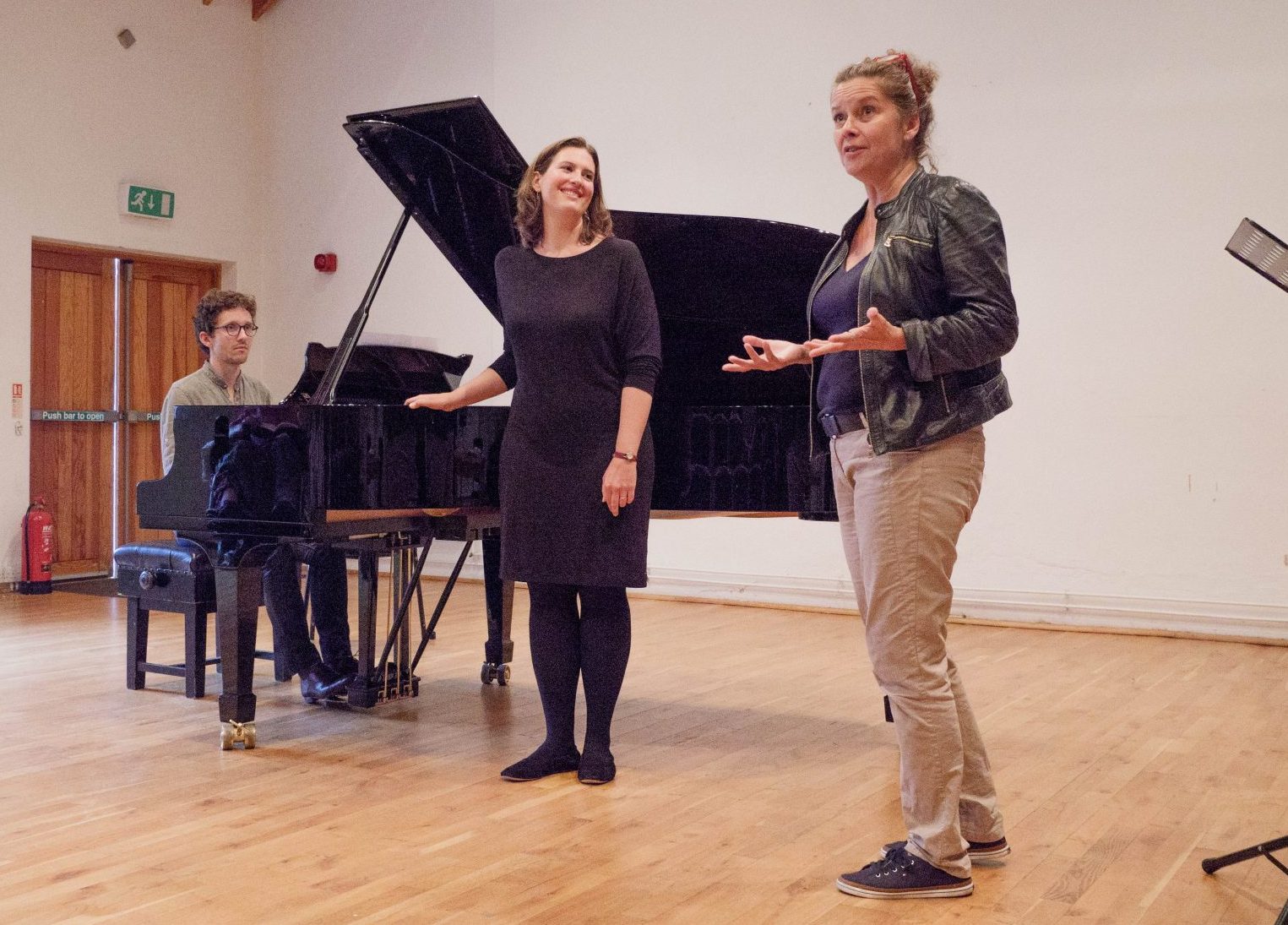 I’m back in gorgeous Aldeburgh for a Britten-Pears Young Artist Programme course on Strauss songs and arias. It’s a pretty wonderful way to spend a week–sleeping in absolute silence, waking up to sounds of gulls, working all day on subtleties of music and German with immensely skilled and generous people, making a quiet dinner, walking on a rocky beach, going to sleep. Yesterday, on our day off, we toured Benjamin Britten and Peter Pears’ beautiful brick house and studio and gardens and archive; standing in Britten’s composition studio, looking out at his apple trees which were his view when writing some of his late pieces, was very special. END_OF_DOCUMENT_TOKEN_TO_BE_REPLACED 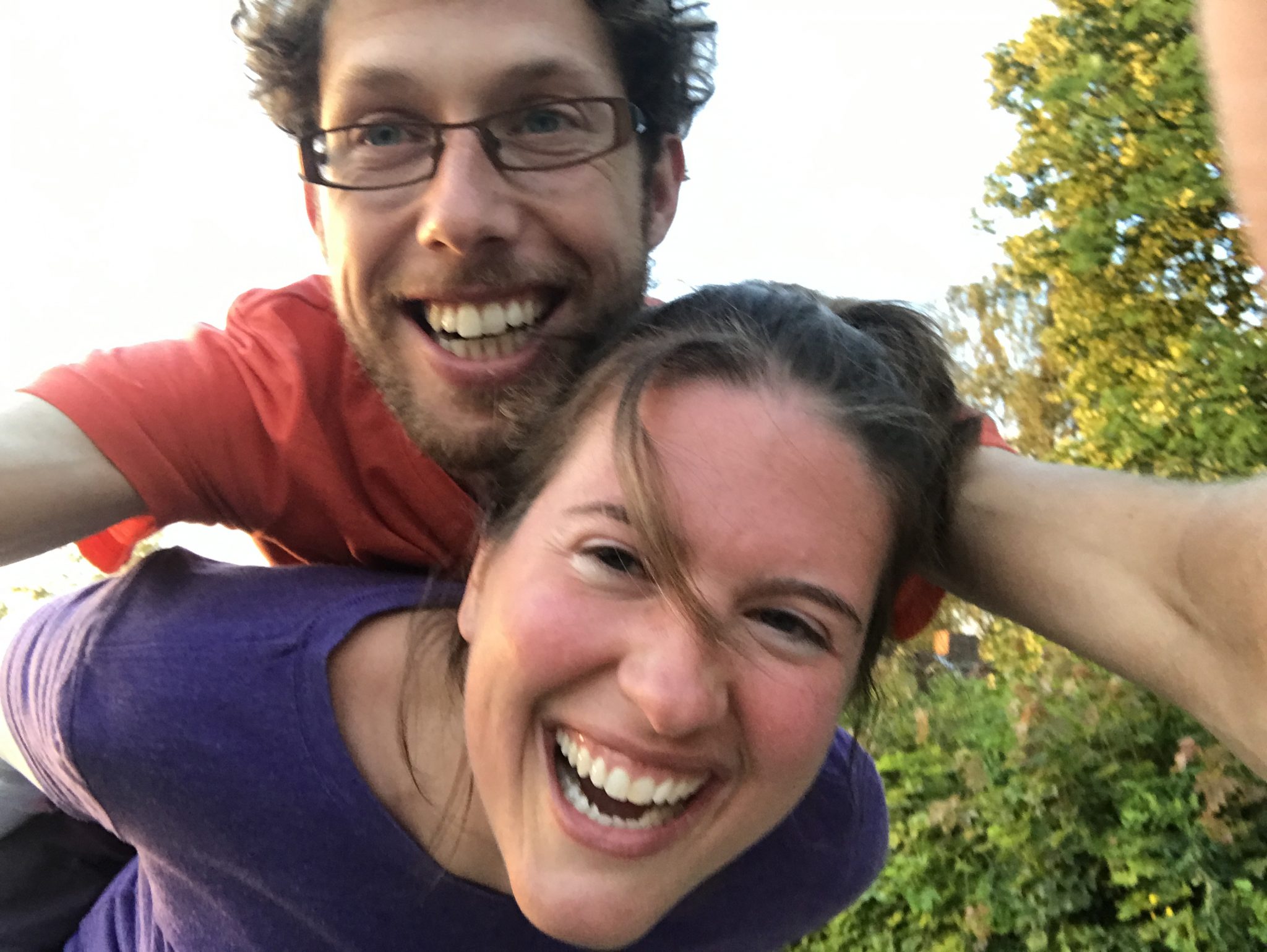 It’s not even September and already I’m a little overwhelmed. I had a lovely, restorative vacation in Finland, but as soon as I got back home in early August, things cranked into high gear. I find myself, once again, actively seeking balance.

END_OF_DOCUMENT_TOKEN_TO_BE_REPLACED

Last week, I unexpectedly replaced ill soloists in two unrelated concerts. The first was a Carmina Burana in the Concertgebouw on about eight hours’ notice, broadcast live on Radio 4 (and still available for listening), favorably reviewed in Place de l’Opéra. The second was a recital of Haydn, Schubert, Brahms, Liszt, Hahn, and Poulenc with pianist Tom Poster in the English countryside. Both were absolutely a delight. 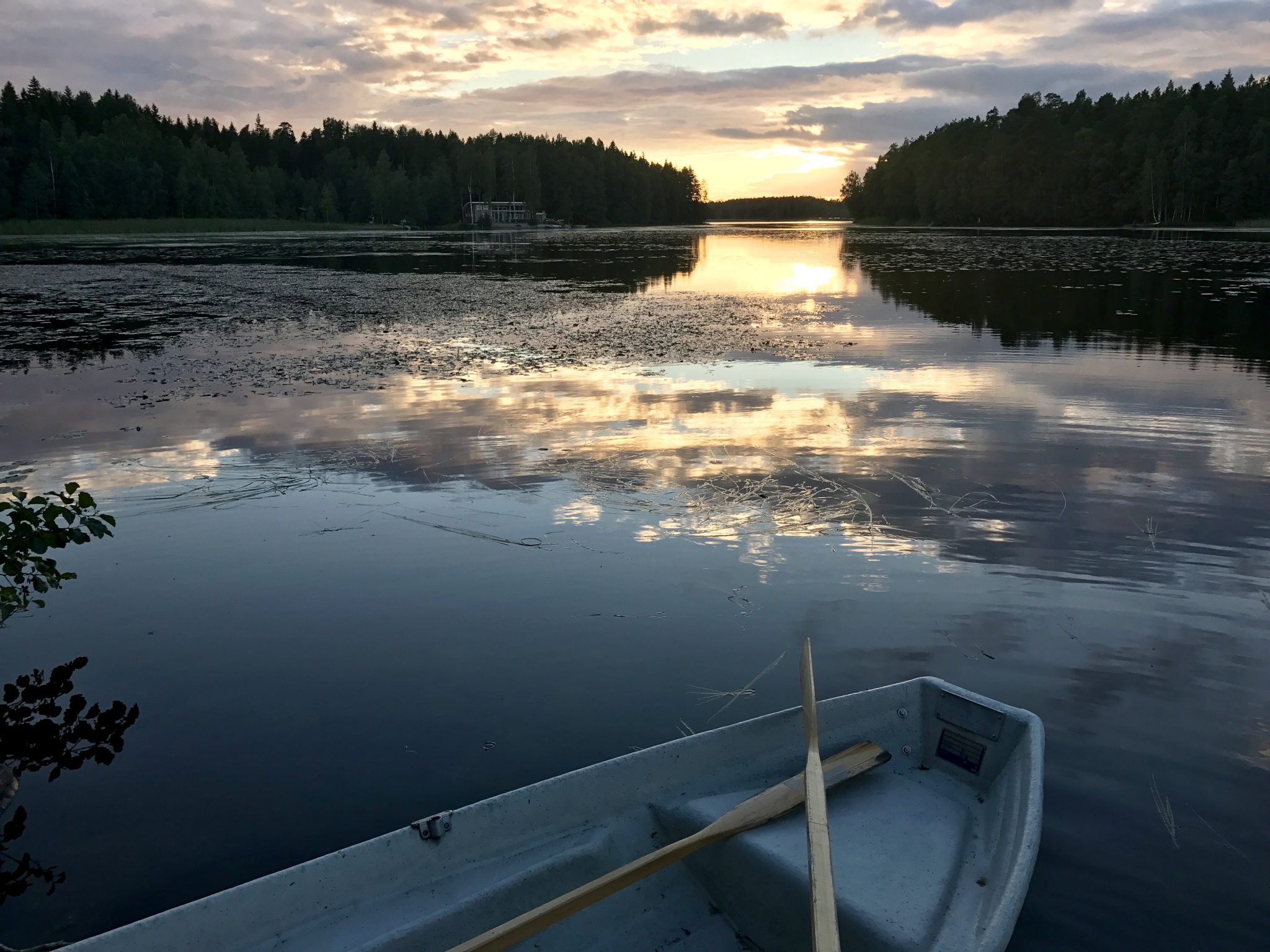 Greetings from gorgeous Finland, where I am hiking, cycling, sleeping, sauna-ing, birdwatching, eating a lot of strawberries and salmon and rye bread, and generally letting the dust settle from this season. I’m also sifting my thoughts about high and low points and how I want to move forward; probably there will be a longer post about this later.

For now, though, there’s just a rowboat.

review of my first Marschallin

“Katharine Dain was an unusually youthful Marschallin, lovely in the Act One Monologue. At the close of the act, her line “…da drinnist die silberne Ros’n” with its arching high piano was beautifully done, as was the opening line of the Final Trio.” Musical Toronto, 12 June

Indeed, I’m “unusually youthful” compared to this role’s usual casting, although the character herself is meant to be close to my age. I hope this was the first of many chances to dive into this most beautiful of roles and operas–what a joy. Bravi tutti. 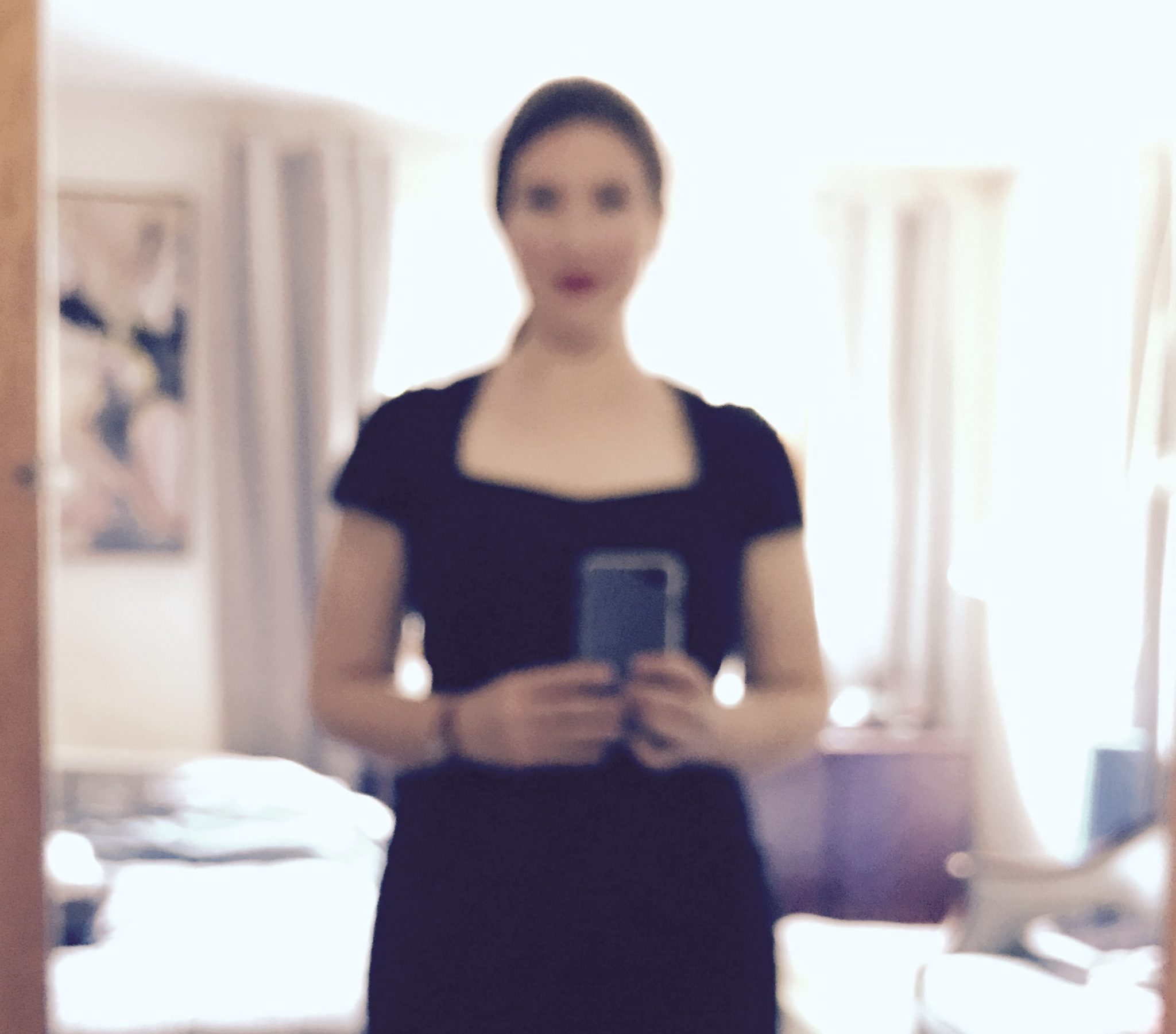 I’m in Toronto, and last night was Rosenkavalier dress rehearsal. I’m singing Marschallin in two concert performances with chamber orchestra this weekend, and the process of learning this monumental score has been overwhelming, joyful, fraught, thoughtful, stressful, beautiful—depends on which day you ask.

Tomorrow night is the first performance, and today is a rest day. I’m staying with some family who live just outside of town. What have I done so far today, after last night’s tiring rehearsal? I woke up late, talked to my husband on Facetime, went downstairs, ate breakfast, chatted with my aunt and uncle; but then, they turned on the TV to the live coverage of James Comey testifying before the Senate about his firing as FBI director. I stayed for five minutes of it, couldn’t stand any more, and fled upstairs. Intensely curious, I spent the next hour constantly refreshing the New York Times live commentary feed, avid to know what was going on but unable to watch.

END_OF_DOCUMENT_TOKEN_TO_BE_REPLACED

“Soprano Katharine Dain’s delivery of the plaintive, tender melody, ‘Aus Liebe, Aus Liebe’, with flute accompaniment, held everyone spellbound and caught at precisely its right moment the sheer depth of a sorrow that would only be finally alleviated by the warm reassurance of the aria, ‘Mache dich, mein Herze,’ sung with robust conviction by impressive bass Brindley Sherratt.” Cambridge News, 12 April 2017 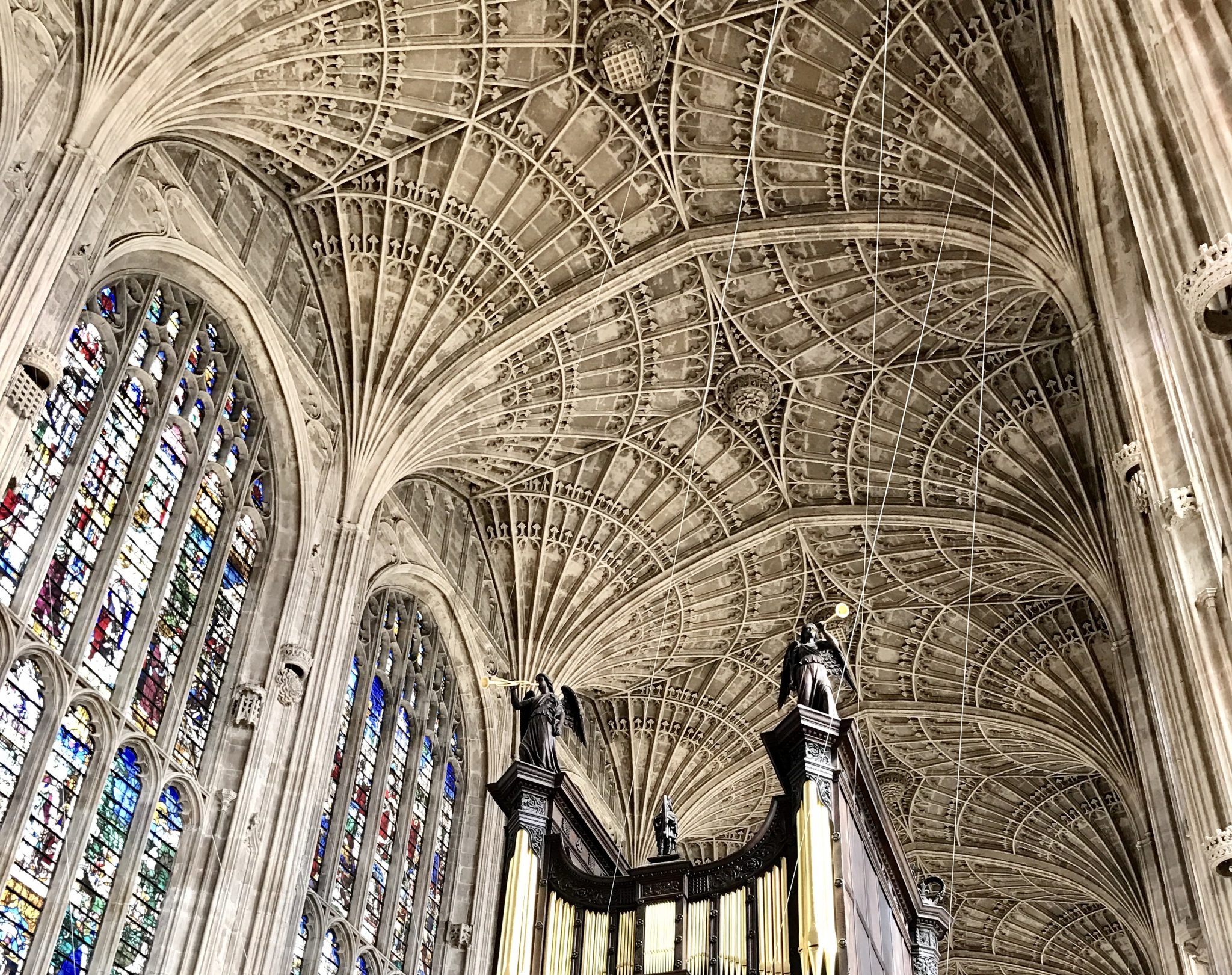 Hot on the heels of a magnificent Matthew Passion (Choir of King’s College Cambridge, Academy of Ancient Music, Stephen Cleobury), I found myself on the train back to London, reading the following New Yorker article (March 27, 2017) about the philosopher Daniel Dennett, who studies consciousness. Although the whole article resonated with me, the following in particular struck a chord.

Dennett is often cited as one of the “four horsemen of the New Atheism.” … A few years ago, while he was recovering from his aortic dissection, he wrote an essay called “Thank Goodness,” in which he chastised well-wishers for saying “Thank God.” (He urged them, instead, to thank “goodness,” as embodied by the doctors, nurses, and scientists who were “genuinely responsible for the fact that I am alive.”)

Yet Dennett is also comfortable with religion–even, in some ways, nostalgic for it. Like his wife, he was brought up as a Congregationalist, and although he never believed in God, he enjoyed going to church. For much of his life, Dennett has sung sacred music in choirs (he gets misty-eyed when he recalls singing Bach’s “St. Matthew Passion”). … In a 1995 book called “Darwin’s Dangerous Idea,” he asks, “How long did it take Johann Sebastian Bach to create the ‘St. Matthew Passion’?” Bach, he notes, had to live for forty-two years before he could begin writing it, and he drew on two thousand years of Christianity–indeed, on all of human culture. The subsystems of his mind had been evolving for even longer; creating Homo sapiens, Dennett writes, required “billions of years of irreplaceable design work”–performed not by God, of course, but by natural selection.

“Darwin’s dangerous idea,” Dennett writes, is that Bach’s music, Christianity, human culture, the human mind, and Homo sapiens “all exist as fruits of a single tree, the Tree of Life,” which “created itself, not in a miraculous, instantaneous whoosh, but slowly, slowly.” He asks, “Is this Tree of Life a God one could worship? Pray to? Fear? Probably not.” But, he says, it is “greater than anything any of us will ever conceive of in detail worthy of its detail. … I could not pray to it, but I can stand in affirmation of its magnificence. This world is sacred.”

St. Matthew always makes me feel this way, too… more committed than ever to my particular brand of atheism, or maybe secular humanism (but not limited to humans)–not a negation of anything, but rather an awe of the extraordinary heights of consciousness, creation, and connection achieved by the human mind and the systems of nature, through a process we are only beginning to understand. 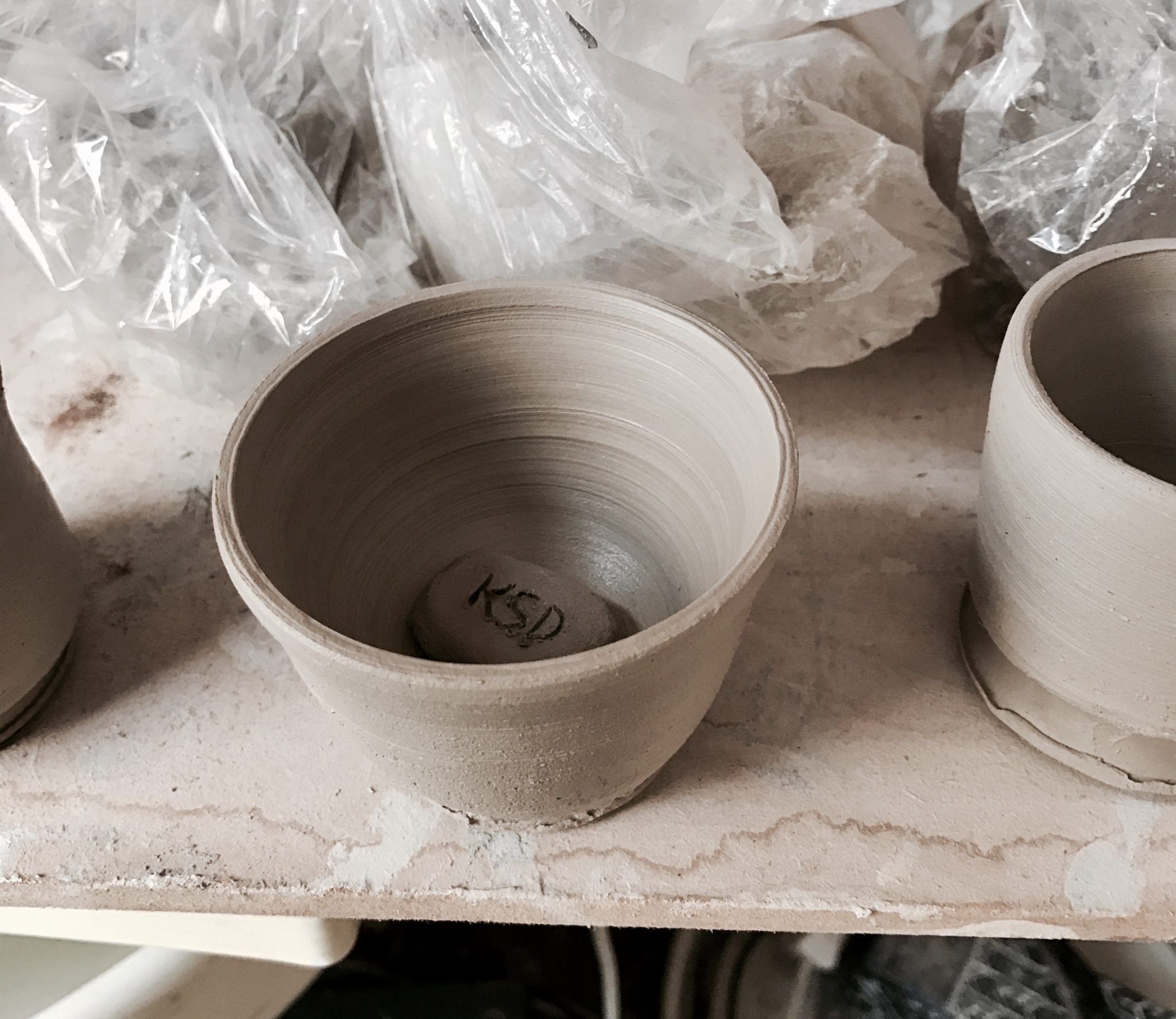 I’ve been taking lessons in ceramics. I’ve loved beautiful pottery all my life, preferring to drink my coffee out of a particular handmade blue mug, geeking out over glazes. I’ll tell anyone who will listen that North Carolina, where I grew up, is a big destination for ceramics, and I personally own a piece by (squeak!!) Ben Owen III that I bought myself with an early singing paycheck. Nerd alert.

So, when I learned that Joris, a talented photographer in the Hague, was also a practitioner and teacher of ceramics, I knew I’d eventually have to try it; and when my Damask colleagues beat me to the punch, went first, and began to make the loveliest things and to enthuse about the meditative zen state they achieved in lessons, I signed up.

END_OF_DOCUMENT_TOKEN_TO_BE_REPLACED

After a huge amount of work, I’m delighted to present my new website. I’ve come a long way since iWeb and my earliest WordPress days. Please do send me any feedback–problems you spot or things you like. I’ll keep tweaking, but this project has been yet another labor of love, and I’m happy to have invested the time and learned a lot as I went. 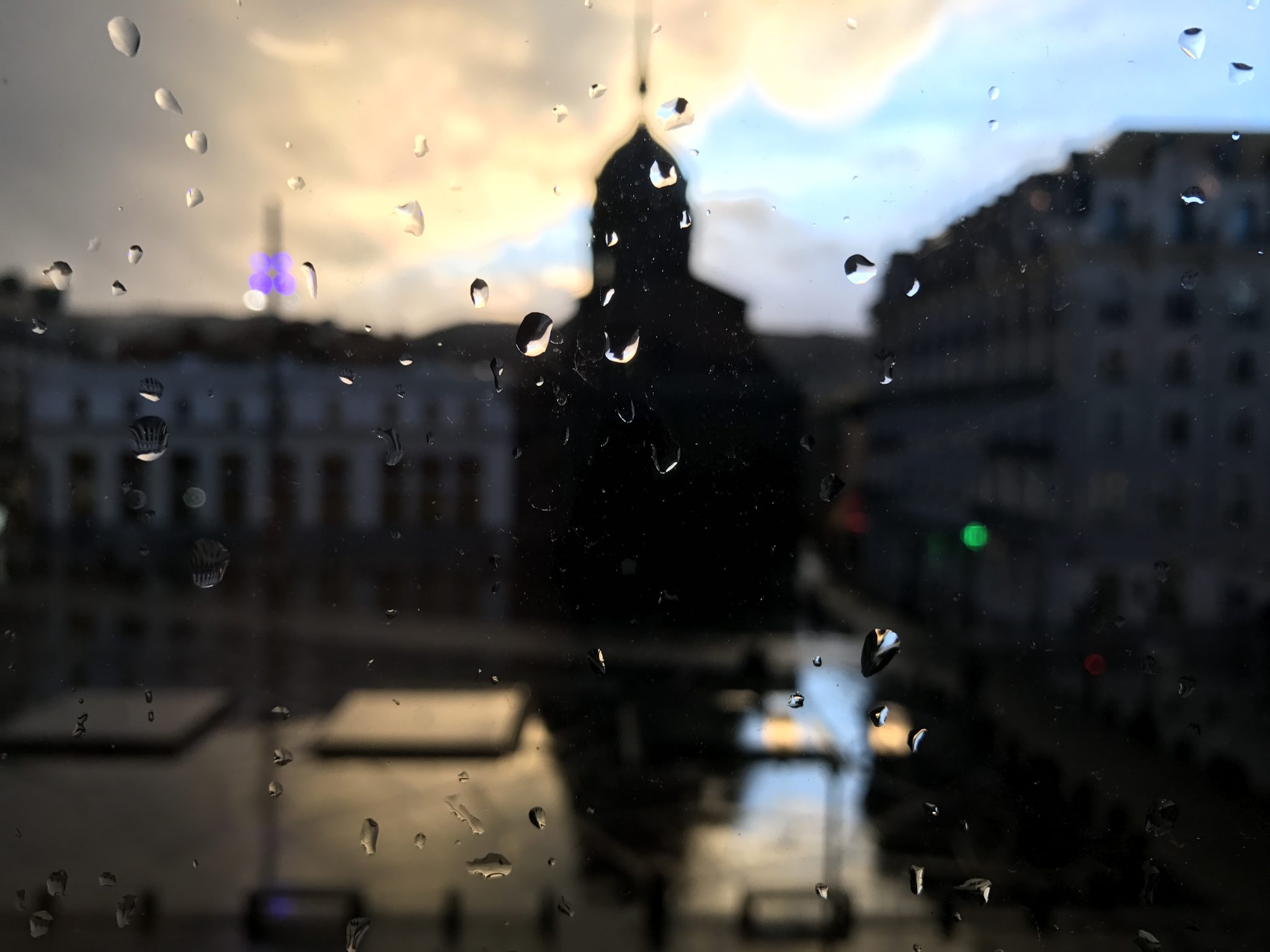 This weekend, I won a prize in the Clermont-Ferrand International Singing Competition. Many competitions award cash prizes, but what I won is a contract for Konstanze in a big new touring production. So that picture up above, taken from a dressing room at the theater of Clermont-Ferrand on a rainy evening, will become a very familiar sight next season. I’m feeling grateful, excited, and validated.

Sign up to receive an email whenever I publish a new post. Your info will never be shared, and you can unsubscribe at any time.