At the end of summer 2018, my partner and I planned six days of hiking in Germany as our only real vacation of the year, which had been very stressful. Four days in, I got an urgent message about a jump-in, and after some discussion, sadness, and a final lovely evening together, I left early to take the job. Ever since, I’ve felt I owed my partner a real vacation.

I didn’t realize how much I also owed myself one. Now, a year later, after ten days of hiking in the Pyrenees and a week at a yoga retreat in the countryside near the mountains, I finally remember what it’s like to not feel close to burnout. It’s the first time in ages. I almost don’t recognize myself.

Seven years ago, I left New York and moved to the Netherlands. Those seven years now divide neatly into two periods in my mind. During the first period, I experienced full-blown anxiety more acutely than I ever had before. Changing countries, leaving all my established work behind, re-starting in a new place where I didn’t speak the language, living on a shoestring, getting married, going through a substantial vocal change—any of these would have been sources of anxiety on their own, and they all crashed down on me in a short space of time. Eventually, that set of changes began to quiet down and settle. I became sure that my skills as a singer were valued in this new place. My income stabilized. I began to feel I had a network of friends and colleagues. My partner and I learned to live together.

Four and a half years ago, in the spring of 2015, I got a tattoo on my wrist. It’s a quarter rest, one of the most beautiful figures of musical notation—I drew this one on a piece of scrap paper on a train. It was meant as a cue to breathe, to listen, to take rest: a constant visual reminder that the silence is as important as the notes, the breath as important as the phonation.

The years since then have seen a second period of upheaval and change. After the first set of fundamental fears quieted, other anxieties replaced them. What music did I actually want to sing? What kind of work best suited my body, my throat, my mind, the rest of me? What choices were holding me back from accomplishing what I wanted? By trying to keep my repertoire broad, was I sabotaging my chances at doing anything very well? There were other anxieties as I entered my mid-thirties. What was most important: comfort, security, money, stimulation, artistic or intellectual autonomy, family, recognition? Were my priorities ones I had chosen or ones I’d been convinced by society were important? How do we make the most fundamental decisions of our lives—to have kids or not, where to live, how to spend our limited time, how much to offer ourselves to others, how much to protect our own space? How can I have some kind of positive impact—leave the world a bit better than I found it?

These are familiar questions to many. I feel lucky to have been able to consider them in the context of interesting work and a reasonably comfortable and healthy personal life. In the middle of this period, a comment from someone at a workshop made me finally decide to try writing in a more systematic way, and now I have this blog, which has become an important part of my self-expression. I’ve made big strides in how I sing and how I prepare. I became a dual citizen of the Netherlands and the U.S. I’ve been living with some baseline of anxiety, but I can point to real progress, and at this moment, thanks to this little vacation, I am calm. Perhaps I’m at the end of another one of these little eras of growing into myself.

Hiking and yoga turn out to be a great combination. After two weeks of doing both, I’m feeling strong and centered and rested. Yesterday I was struggling to stay balanced in triangle pose when I caught a glimpse of that quarter rest on my wrist, and I thought, yes! Breathe. I’ve known all along that that’s what I need—enough to get a reminder of its importance permanently scarred into my arm in black ink. I have plenty of drive, work ethic, skill, thoughtfulness, savvy, passion. I just need to complement those with silence and space sometimes.

Silence and space are within me—within all of us—as long as we remember to reach for them. The answers to the pressing questions will come, but can’t be forced. 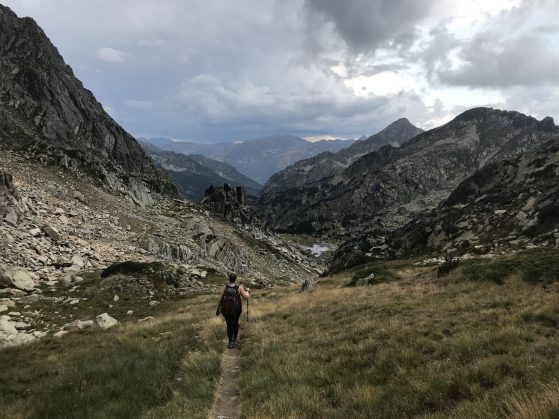