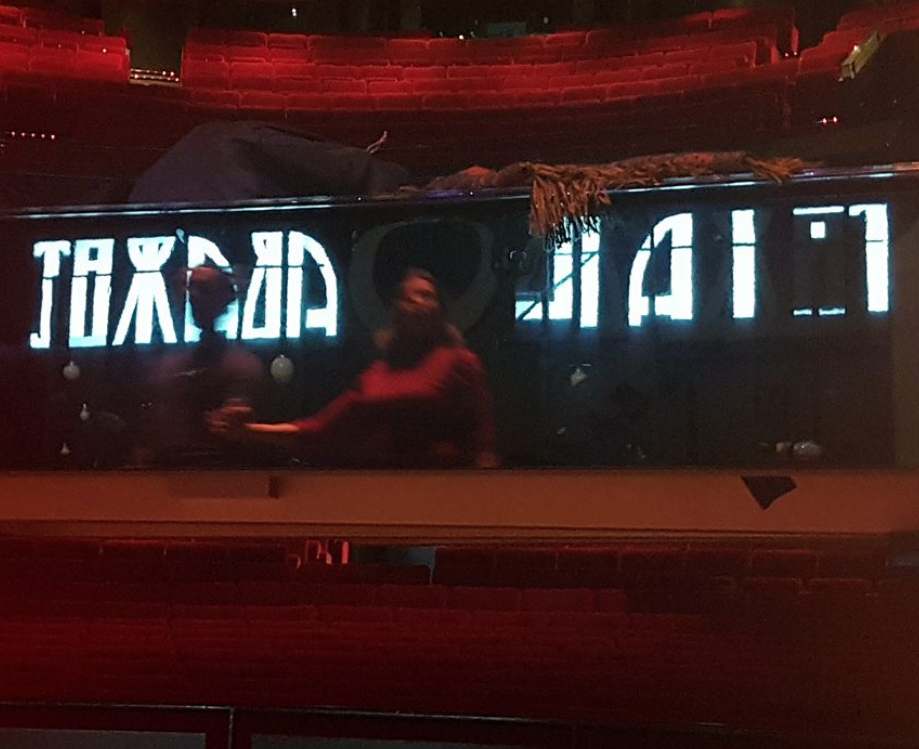 “Where’s the push?” asks Victor the choreographer, repeatedly, in our short session on stage in Rouen today to address Konstanze’s physicality in the first aria. We’re trying to refine her vocabulary of movement, which means considering character, motivation, confidence, timing. We look for externalizations of her independence, her exhibitionism, her particular way of getting overwhelmed, her way of trying to pull herself together, her diva mannerisms. She is open and proud, so her chest and back don’t collapse—or if they do, it’s in a very deliberate way. She’s in control of herself, so her arms are never pinned to her sides. She reacts fluidly to situations, so her body is never rigid. She is protective of her body, so she takes physical cues from others but isn’t completely influenced by them. She leads, quite literally, from the heart.

My own tendencies can be to flail my arms, furrow my brow, look down and avoid others’ gazes, pull my shoulders in and collapse the chest as a way of protecting myself, react idiosyncratically to others’ cues… so I need a lot of reminders, when working on Konstanze, to separate my (true) emotional engagement with the character from my own physicality—to use the similarities but to separate out the differences between Katharine and Konstanze. She has to be natural, but in her own way. Today, Victor found a useful way to prod me back into awareness when I would get out of it: asking “where’s the push?” In other words, what parts of the body are engaged right now? Where am I exerting myself? Is that what I want, is it deliberate? (Some places where I repeatedly felt “the push” when prompted were my shoulder blades, the sides of my ribs, my feet, my thighs, my sternum.) When I feel engagement on the side body, for instance, how does that effort influence my whole range of movement, all the way out to the tips of my fingers—how can that effort elongate into the arm, all the way down into the toes? How does it help me complete a gesture? How does it lead into the next gesture, emotion, or impulse? How is the effort transferred? Is that effort helping me to make the character clear, or is it blocking the character?

It was a useful metaphor to carry into the Sitzprobe, too, which was happening simultaneously in the rehearsal room. We have a new conductor in Rouen, Antony Hermus, who is full of fire and specificity and joy. We’re still only just getting to know each other, so I’m hyper-alert during the orchestral rehearsal, trying to take every bit of information he’s giving me, trying to feel the new currents in the music, trying to adapt my habits and understanding of the piece to a new situation (and once in a while holding my ground and taking the lead). Musically and vocally, too—where’s the push? What efforts of mine are necessary and sustaining and lead the music into the right place and differentiate the colors, and what efforts block it or weaken it? How can I follow through completely on a musical or vocal gesture, instead of letting it flag partway through? A few times, Antony said to me that he needed more leadership from me, more directing and deliberate guiding of the phrases, and I would give it, and the orchestra would respond brilliantly and the music would lock into place more sparkling and alive.

And the more I think about it today, the more I realize that “the push” is a useful metaphor for everything.

Two days ago, I was in London for the afternoon and participated in a panel discussion at Guildhall for some of the vocal department. The guests were me and a pianist who’s started and promoted many of his own projects, sitting in the front of a room and having a rather free-wheeling conversation about our own experiences with branding, communication, social media, the overlap of online and personal presence. Because of this here lil’ blog, I was brought in as, apparently, someone with expertise in this area to pass on my august knowledge to young singers. I was wildly flattered to get this invitation, but of course I also thought to myself, really? I’m still figuring this all out; I feel like every year I only get a tiny bit more knowledge of myself, and of what “branding” in our industry really means, and how I fit into that scheme; I also feel like I’m just barely out of school. Being back in the building where I spent two years, my own time at Guildhall came back so very vividly that it was as though no time had passed. But as we had the discussion, I realized that I can actually speak quite fluently about these questions, not because I have all the answers but because I’ve thought deeply about them and do have many opinions.

And what my opinions boil down to, again, is: Where’s the push? Where are you already exerting effort, and how far can you carry that effort gracefully and enthusiastically? How does that effort lead to your next effort? Are you blocking yourself with unproductive effort, or with habits of laziness or insecurity or fear that need to be overcome with more engagement and courage and follow-through? I think this is a perfect metaphor for constructing a singing career. You have to look for how your own tendencies and passions overlap with what’s valued and needed in the industry. That’s not going to look the same for everyone, but when you find those overlaps, you need to pursue them. Complete the gesture. Find the grace and the uniqueness in your own strength—and, equivalently, see how your strength can lead to other efforts; see where you need to shore up and pay more attention to areas that come less naturally to you. Of course this can’t happen all at once, and for even the most talented and polished and career-ready, it happens in fits and starts; when I was the age of the Guildhall kids I spoke to, I was not even remotely career-ready and my talent was unhoned. So for all of us, there will be lots of failures, lots of misdirected effort, lots of chances not pursued. Even when you’re “making it,” it’s still a continuous process of evolution… I’m still confronting some of the same issues as a few months ago when I was looking really deeply into myself before the premiere of Entführung in Clermont-Ferrand. I still have many moments that I don’t meet my potential, that I disappoint my own expectations or others’ of me. But because of the efforts I do make, and because I’m learning to train my awareness on myself in another way, the progress can start to feel quicker and cumulative. My singing of the role is closer than ever to how I’ve always wanted it, and still I can see how much farther I’d love to be able to go, and I can see the vast distance I’ve come even since early January. Where’s the push? Always be aware of and follow the push.

On the international stage, today millions of people participated in the March for Our Lives, part of an inspiring (and almost surprising, after all this time) sustained movement for gun control in the US. Finally, some anguished teenagers and their passion and their activism and their forthrightness seemed to spur on many disenchanted Americans to ask: where’s the push? How can we take the passion and the engagement and complete the gesture? If I’d been in the US, or in a city with a protest, and not working the whole day, I would have been happily out with everyone, letting the collective effort push me and light me up from the inside; as it was, I can live vicariously through it on social media.

It’s so easy to ignore the pushes, to bury yourself in little unimportant things, to stay rooted in your idiosyncrasies and habits and small weaknesses and ways of thinking about yourself or society… but there’s so much power in actually being aware of where there’s already effort and engagement, really keeping that in the front of your mind, and letting that influence the rest. Lead from the heart and feel the echo of that effort down to your heels and the tips of your fingers; let the effort live in the body and the mind.

Feel the push. Complete the gesture.