I am honored beyond belief to announce that my 2020 album Regards sur l’Infini has won the Edison Klassiek award (category: Best Debut). I offer my most heartfelt gratitude to my partners in this adventure, Sam Armstrong and Frerik de Jong, and to everyone who listened, supported us, and told us what the recording had meant to them.

Never in my wildest dreams did I anticipate that my quirky project would be such a hit. Quite some time ago, I thought of a cool juxtaposition of music I liked. I gathered some promising threads into a vague program jotted down in a google doc, ordered scores without knowing what the pieces would sound like, convinced Sam to give the program a try, began to see patterns in the poetry, pitched the project as a recital (mostly unsuccessfully), listened, thought, read. Finally, when Covid opened up months of unstructured time, Sam and I rehearsed and rehearsed and rehearsed, thought about thematic connections and key relationships, tweaked song choices, got friends on board, fundraised, coached, recorded, wrote, edited, publicized, released.

In my mind, I was calling the project a mix tape. On 23 December 2021, during the announcement of Edison winners on Radio 4, Mischa Spel, head of the jury, observed to presenter Hans Haffmans that 2020-21 had been an unusually strong year for concept albums (a concept album! right, that’s the grown-up term for a mix tape) because so many artists had time to sit with their ideas at length. Then she said that our disc was the kind of album the jury always wants to be able to award Best Debut to—even in such a competitive field, in a competitive year.

Sam and I were in the studio listening as she spoke. She pushed the statue across a table to me—a Covid-safe award presentation—while my emotion at her words bubbled out as a series of awkward giggles (which I only realized when I listened back to the broadcast; will I ever grow up into a dignified human? no). Then we performed two songs on air and I gave a short interview in Dutch, perhaps the first time I haven’t disgraced myself in a public professional setting in my adopted language. (You can watch the whole segment here, if you’d like.)

Eventually, the camera panned away, they began talking about the next winner, and I burst into silent tears and clung to Sam for a few unmoored moments as though shipwrecked. We scuttled out of the studio and helped ourselves immediately and untidily to a waiting bottle of champagne. The rest of the evening was a bit of a blur: selfies, hedonish cackles of laughter, official photos, jokes with Mischa and Hans and Daniel Reuss (Cappella Amsterdam conductor and one of the first people to give me a job in the Netherlands, and also one of this year’s winners), hugs with Frerik who arrived afterward to celebrate with us, and an eventual clumsy hop over a slippery fence to catch a train at Hilversum Media Park, backpacks tossed into the wet grass on the far side, the heavy statue clanking a little on its landing.

Now, Edison is perched at home on a speaker next to Baby Yoda. 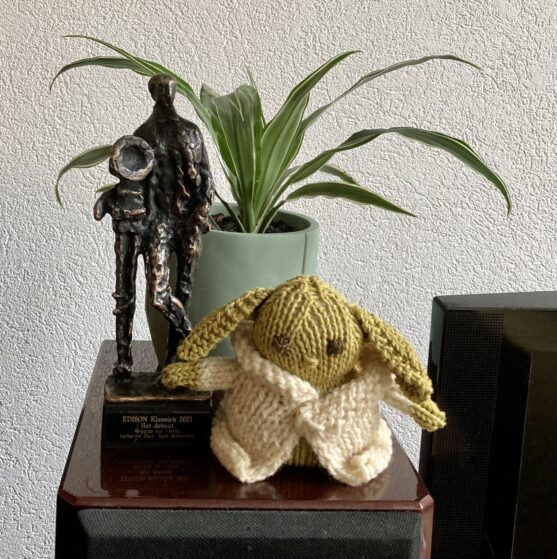 A year ago, around the time the album was released, I knitted Baby Yoda out of scrap yarn as a Christmas present for my husband. (My capsule review of The Mandalorian: only moderately entertaining, but the score by Ludwig Göransson is a categorical masterpiece and elevates the whole reboot to a Wagner-level Gesamtkunstwerk, and I say this as a diehard Star Wars fan.) He’s been an unofficial house mascot ever since—a little fat and ungainly and droopy-eared, with some uneven stitching that shows his stuffing. An Edison-worthy creation? No. But he’s cute, and somehow I’ve been glad of his goofy presence during this hard, hard year.

Yes, 2021 was hard, despite all my good fortune. In the summer, I finally wrote about what Covid has felt like to musicians; I’m not afraid of vulnerability, but this was one of the most difficult posts I’ve ever written. The fall was busy, absorbing, and full of inspiration, but the winter has brought a new hard lockdown and rushes of doubt. Even so, I feel better than I did a year ago, and it’s not just the Edison. It’s the passing of a year I expected to be easier than 2020 but wasn’t. It’s the relationships I’ve kept and those I’ve gently let go. It’s the vaccine. It’s the walks, the many hours of knitting, the long calls with equally disoriented friends and family, the movies and shows and books that made me laugh and cry. It’s every single thing I cooked this year to feed myself or someone I love, even when it was the last thing I wanted to do. It’s the buds of new ideas that eventually started to poke through unprompted—mostly when I was finally seeing someone again after a long absence, or learning chamber music again after a long silence, or hearing the full thrilling color of an orchestra at a first rehearsal and having to remind myself to start singing after the 16-bar introduction because some little guarded corner of my heart still felt sure the gig would be canceled.

There are no guarantees, right? All we can do is the best we can with the time we have, as Covid has made painfully clear. I brought the very best of myself, I think, to Regards sur l’Infini, but receiving this award (or any award) doesn’t mean the work is finished. It’s at the beginning—if I’m lucky. Maybe the Edison brings validation and momentum enough to continue doing what I was already doing, but with a little more name recognition with audiences, a little more trust within the industry, a little more advance interest in my plans. Crucially, it gives me a reference point for my own work: it shows me what I’m capable of with enough time and care. In the meantime, the rest of life just goes along in its own weird way—again, if I’m lucky.

This album was about uncertainty, anticipation, dread: about discomfort with the present, about nostalgia for the past or longings toward the future. Very Covid.

I talked to a friend yesterday about the 14th-century Iranian poet Hafez—whose words incidentally also headed up my big Covid post. His work was a revelation to 18th- and 19th-century readers who discovered it in translation: poetry about wine, about religion (for and against), and of course about love. For Hafez, the various human ecstasies were inextricably connected to each other: wine and love, sex and spirituality, God and art. We talked about composers who were inspired by his expansive view of human nature, his consideration for the sublimity of experience of any ordinary person.

This morning, inspired anew, I pulled my little Hafez volume off the shelf—not particularly good English translations, actually—and read it over coffee. One poem in particular will stay with me: a reminder that everything is transitory, that even small moments matter, that recognition is something but not everything, that it’s the responsibility of those with good fortune to elevate others—and that joy and sorrow can never be separated from each other.

Happy 2022, friends. Keep loving your people, wearing your masks, and making your art.

Dear friends, that friend with whom we once
Caroused at night—
His willing services to us
And our delight … remember this.

And in your joy, when tinkling bells
And harps are there,
Include within your songs the sound
Of love’s despair … remember this.

When wine bestows a smile upon
Your server’s face,
Keep in your songs, for lovers then,
A special place … remember this.

So all that you have hoped for is
Fulfilled at last?
All that we talked of long ago,
Deep in the past … remember this.

When love is faithful, and it seems
Nothing can hurt you,
Know that the world is faithless still
And will desert you … remember this.

If Fortune’s horse bolts under you,
Then call to mind
Your riding whip, and see your friends
Aren’t left behind … remember this.

O you, who dwell in splendor now,
Glorious and proud,
Pity Hafez, your threshold’s where
His face is bowed … remember this. 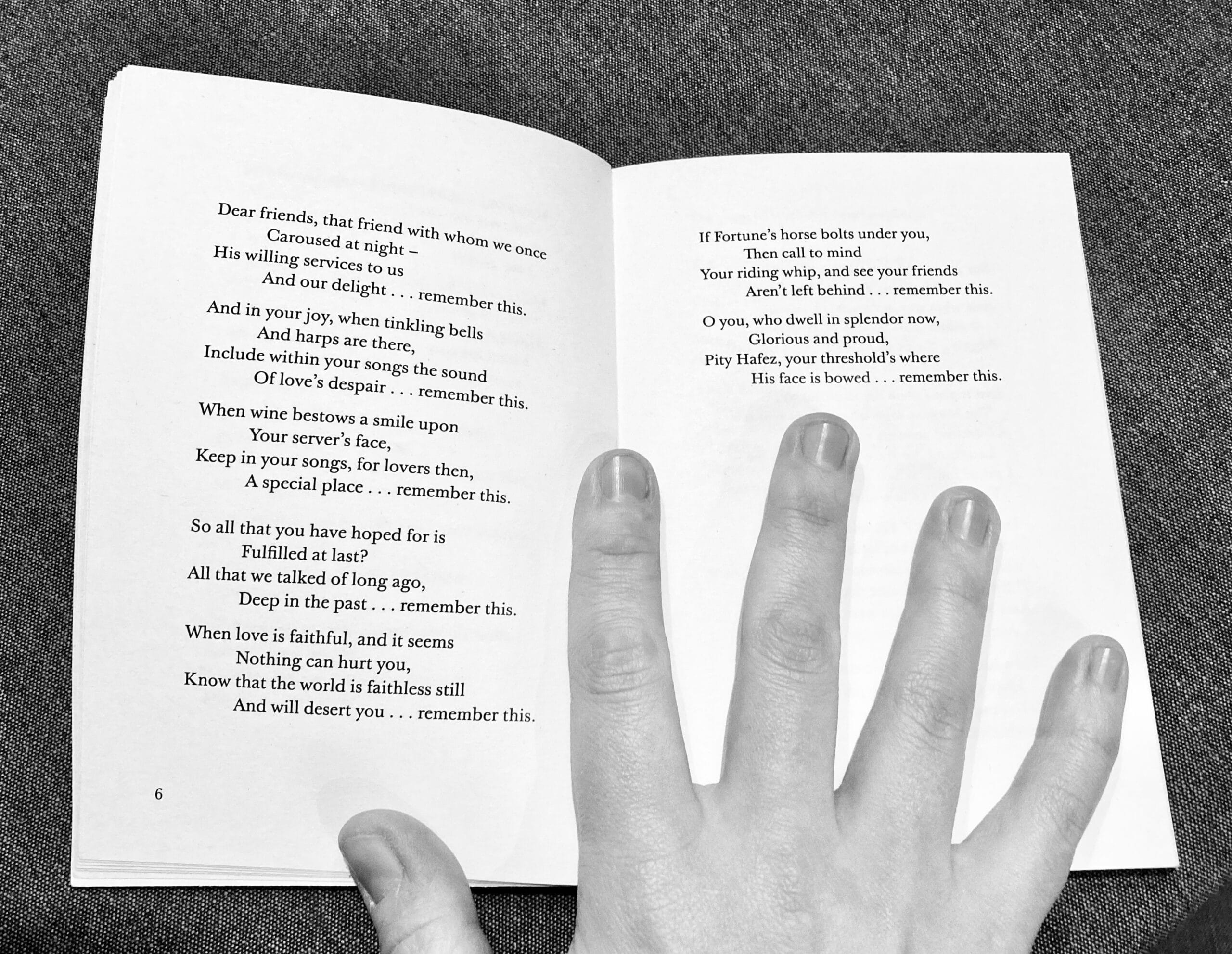