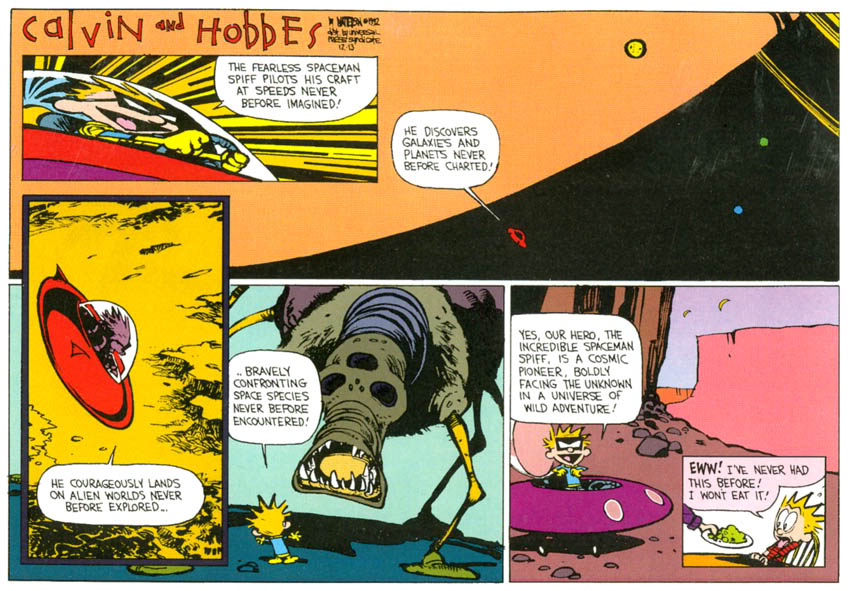 We’ve all read Khatia Buniatshvili’s bio, right? If you haven’t, treat yourself. She’s a pianist (apparently a good one—I’ve never heard her), and her bio is riveting. It lends itself well to dramatic recitations over dinner; it could be a drinking game. The last paragraph is particularly great: “Khatia Buniatishvili, shining pianist at the height of her abilities, came into this world in a shower of light during the summer solstice. On a human level, she is attracted more to equinoxes, being smitten by justice and seeking day and night in equal share.  By lifting one’s eyes skywards one might notice her playing hide-and-seek with either Venus or Mercury. The cosmos is her garden and it is in its movement that she feels alive, astride a comet.”

Maybe we should all rewrite our bios! The thing is, hers is working on some level—I’m talking about her. Although they’re necessary, bios are generally the worst, somehow both boring and irritating. I’ve been a professional performer with a bio (written by me, about myself) for about fifteen years, and the genre still makes me cringey and self-conscious; either it’s too detailed and list-like, which is dry, or too descriptive, which is braggy and subjective and easily veers toward the ridiculous.

Look at Khatia, though. What if we stopped worrying and embraced the epic? What if we pulled a Spaceman Spiff, a Stupendous Man, and channeled our inner hyperactive six-year-old as we talk about ourselves in the third person? This industry thrives on individual responses to individual work. It’d be one thing if there were objective, peer-reviewed, double-blind, clinically-tested measures of quality in performance, but there just aren’t. We’re all flailing about in the emotive soup together, seeking day and night in equal share, playing hide-and-seek with Venus or Mercury. (Has Khatia played Vivier or read Calvin and Hobbes??) Maybe we should all be taking more risks, in our bios, in our repertoire, in our lives!

On that note, happy Equinox, everyone. Don’t worry, I’m not actually going to write a new bio that begins “we join the fearless SPACEMAN SPIFF, interplanetary explorer extraordinaire, out at the farthest reaches of the galaxy…”

The fall equinox always coincides with the start of a new season, so it’s always more a moment of reflection for me than the actual change in the year. Performers think in seasons: our calendar is the school calendar. September always feels like a new beginning, December 31/January 1 feels merely like a pause for sleep (if you’re not singing a New Year’s Eve gala someplace), and the summer is a time to take exhausted stock of where you’ve been and regroup (if you’re lucky enough to have some time off).

As I recently wrote, I took a tiny bit more time off this summer than usual. Still not enough, perhaps, but the 2019-20 season is going to be a big one, and I’m grateful I’ve had a little time to process and re-balance. This week, I’ve been going through some sound clips and media from the last two years, culling older work from the internet and choosing what to highlight. I always learn about myself when I do this. Here’s what I’ve learned this time: I’ve had success in the past with music that is high, brilliant, audibly difficult. This year, the recordings I like most are more lyrical, less jazz-hands. My best performances are getting more controlled, less thank-heaven-I-pulled-that-off. My emotion and thought are getting better integrated with my physicality. The ranges are getting a bit less extreme.

This seems appropriate, considering what’s ahead. This season’s rep is still very challenging, but it will tax a different side of me: my groundedness, my stability, the length and steadiness of my breath and preparation. I’m singing my first-ever Wagner this season (squee!/ack), my first big Mahler, Mozart’s Donna Anna and the Brahms Requiem in big halls. There’s still a lot of chamber music, Bach and Handel, song, edgy contemporary music, interesting and delicate curated programs in small spaces. But I’m not going to be able to fly by the seat of my pants this year—not in this repertoire. It’s been carefully chosen and needs to be carefully worked in. Maybe I’ll spend a little less time astride comets (…the jokes write themselves…) and a little more time settling into a balanced, equinox-y groove.

The Wagner project is the clearest manifestation of this goofy metaphor. This past March, I got a text from Manoj Kamps, a conductor and dear friend, saying “So I can’t promise anything BUT how busy are you in February 2020 and how would you feel about singing the Liebestod?”

I listened to the first recording I could find—guys, run, don’t walk, to the legit RuPaul awesomeness of Jessye Norman lip-synching to her own recording with Karajan, in gold caftan and turban, WITH FIRE!—and I instantly texted back “OMG YES YES YES.”

And then we talked about the project on the phone. I took a step back and asked myself: hang on, can I actually sing Wagner? Can I sing one of the most iconic scenes in opera by a composer I’ve never dared touch that people devote whole careers to? A specialist’s repertoire, one many consider the pinnacle of operatic singing? Is this wise?

I experimented at home, of course, and it seemed possible; several external things began to make it seem more possible still.

First: Manoj and I know each other, and each other’s music-making, very well. He’s heard me in Strauss and Brahms and other related composers, and I’ve seen him conduct operas. We’ve worked together on very particular and tricky music. He’s immensely sensitive to the voice as an instrument, and he can sculpt and balance the sound of the orchestra precisely so that we’re a match for each other. This won’t be Jessye Norman’s Liebestod, or Birgit Nilsson’s or Shirley Verrett’s (unfortunately!), but mine will speak in its own way.

Second: the Wagner is paired on the program with a commissioned piece for soprano and orchestra by Rick van Veldhuizen, a young, dynamic composer. The idea is for the pieces to knit together almost seamlessly, although his style is of course diametrically different than Wagner’s, into a combined statement of identity, of gender, of voice, of physicality. Rick and Manoj and I spent a day geeking out about music together and established a sense of trust and responsibility. I began to feel I could make sense of the concept and bring it to life in a personal way through these two scores.

Third: I had the blessing of Antony Hermus, a conductor I trust completely. We worked together in Rouen on Entführung in spring 2018. I remember those weeks so vividly; I wrote about them here and am still thinking about all the same things. (Where’s the push? Complete the gesture!) The music sparkled under his baton, the orchestra was dynamite, and I was finally getting my voice around the impossibilites of Konstanze, so we could explore and introduce new colors into the piece spontaneously: humor, sadness, shock, brilliance. It was so stimulating and satisfying. At one point during those weeks, I asked Antony for some advice about repertoire and career planning. His answers were crystal-clear: I have to be the one to decide what work I take. I have to set my own boundaries. I can’t worry about who will like me or not based on what I choose to do. I have to make a short list of pieces I want to sing and not accept any job that strays too far from that list. He wouldn’t tell me what pieces he thought the list should include; he insisted that it come from me.

I made the list. I’m not going to publish it here—it feels rather personal, in fact. But here are the first few items.

Strauss: Four Last Songs, Arabella, Daphne
Mozart: Countess, Donna Anna
Messiaen: all the songs
something written for me by Saariaho, Benjamin, and/or Adams

Within a month of this conversation, I had my first contract for a full-fledged Donna Anna. Within two months, I had a second Donna Anna. Six months later, I finally cracked the spine of Messiaen’s Poèmes pour Mi, and Sam and I performed several of them as a way of starting on the whole opus. A year later, I was considering taking baby steps into larger German lyric repertoire. I never showed Antony my list after our conversation in Rouen, but having it in a note on my phone that I can check occasionally is clearly helping to focus my attention. He was asked for his opinion on the Wagner/van Veldhuizen project when it was in the planning stage, and he responded, why not? It’s not the whole role of Isolde (which would unquestionably be a bad idea). Yes, she can certainly sing those seven minutes of big German Romanticism if everyone involved is careful. Yes, she can do it on the same concert as a wild contemporary score.

His vote of confidence helped get me over the hump of assuming I couldn’t possibly sing this repertoire because I had never done it before. Now it’s in the calendar—all eleven performances of it. There’s a Spaceman-Spiff-style outrageousness to the whole concept, admittedly; I’ll be super happy if a reviewer says that I delivered the music as though I’m dallying in the cosmos astride a comet. But underneath it all, I’ll be doing my utmost to keep things balanced, to seek day and night in equal share, to find the push, to complete the gesture, to keep my feet on the ground.

Let’s embrace all the ridiculous metaphors. Let’s rewrite our bios. Let’s take risks sometimes, and let’s sing the music we want to sing.